Heading northeast to Gualaceo you can turn left over the Puente Europa to reach Paute, the town that famously vanished underwater during the tragedy of La Josefina exactly 20 years ago. The bridge was built through EU financing, hence its name, and the area has only slowly resurfaced.

El Cabo is the first mid-sized suburb along the way. By midday, stalls line up to sell tortilla patties in their staple three varieties (wheat, corn flour and fresh corn, our Ñan choice, for sure!) and rotisserie chicken (pollos asados) to hungry travelers, as the quintessential roadside bite.  A turnoff further along the road will take you to peaceful Hacienda Uzhuphud.

Further up lies Zhumir, a 1658 town linked to the leading aguardiente brand with which it shares a history and name. You find flower plantations, as well, up until Paute, a once pre-Inca settlement, today an overgrown town with a large, cement square, well known  for its hornado, slow-roasted pork. Looming over the town we see the “Dog’s Head” (Cabeza de Perro), a favorite hill  of daring paragliders. 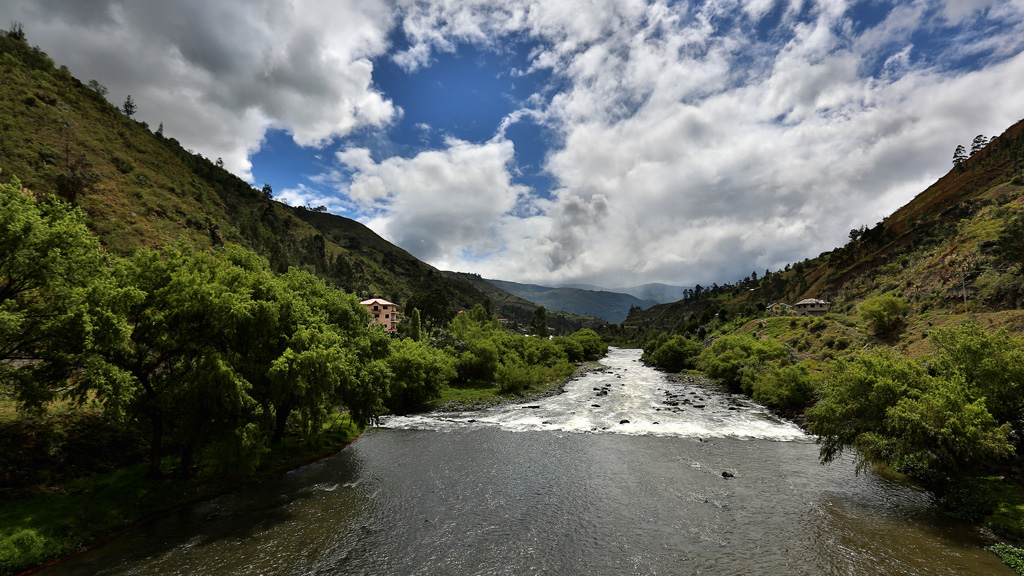 More than the town itself, Paute – which bared much of the brunt of the La Josefina’s natural dam disaster – is ironically known for the artificial dams of the north,the Daniel Palacios plant, as well as the recently built Dudas-Mazar along the way.

Continuing east and north from Paute, you reach a string of rural districts and their towns. First lies Guachapalá, whose claim to fame is the nearby Señor de Andacocha sanctuary, where a small religious medallion is visited by some 300 people weekly; el Pan follows (not in reference to bread, but to Pan, the Pagan deity), an ancient gold- diggers’ frontier along the Collay mountain range (you can visit its beautiful lakes, including lake Friega Gente:  the people harasser). Interesting Cañari ruins are found at Pan’s Turi lookout (not to be confused with El Turi in 1753 Cuenca); finally lies Sevilla de Oro, the closest Access route to the Daniel Palacios hydroelectric plant, and options to visit the Collay River and its protected forest.

If the movie “Up” by Pixar, which tells the story of an old man who sets his house aloft by tying it to a zillion helium balloons, sounds incredible, what about this tale of ingenuity, love and perseverance that occurred in La Josefina, province of Azuay, in 1993.The drama began after a monumental landslide in the area of La Josefina dammed the Río Paute, creating a huge lake of water behind it. Eventually, the mud dam gave way, flooding countless homes, roads and crops. An entire nation followed with stunned suspense the trials and tribulations of one Walter Suarez, a local man who, managed to tie 60 empty oil barrels to his house’s wooden foundations. As the water levels rose, they carried his abode 120 meters aloft on the ebb of the current, safely depositing it back down again. Today, you can visit the legendary “arc” fifteen minutes north of Cuenca, along the Paute detour, in the area of El Descanso, where his daughters proudly show photos and news- paper clippings of their daddy’s feat, retelling the story and happy ending of the “Little Floating House of La Josefina”