It is the beginning of winter in San Clemente. It should be raining, but the sun still shines over Pukyu Pamba (Spring Hill). The inhabitants of this community amid the clouds are looking forward to the arrival of the rains, when they can sow and harvest their crops. Quinoa, wheat and corn are frequently served at the table of the Guatemal family. For almost 20 years, they have opened their home to visitors. 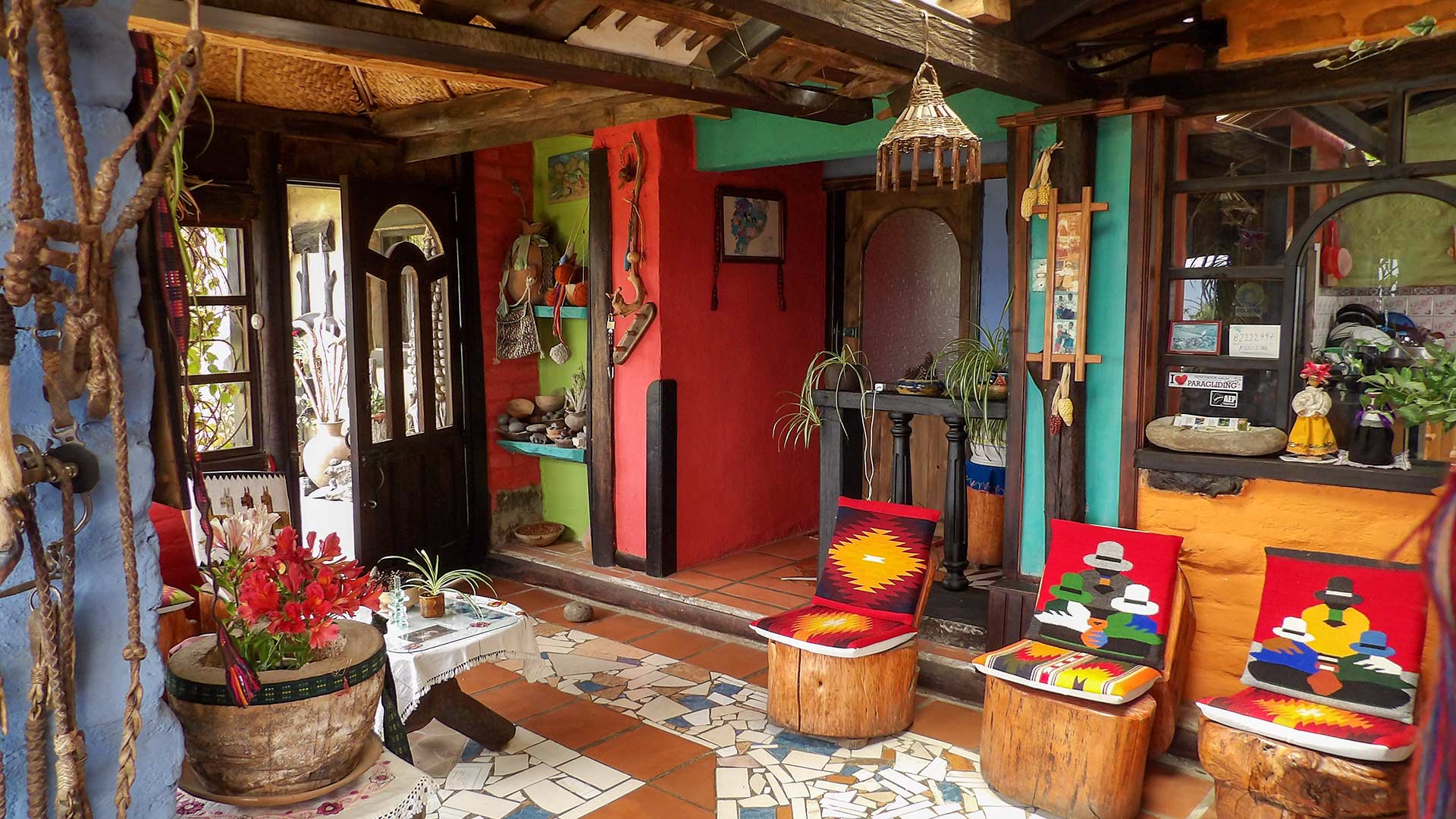 The suburban neighborhood of La Esperanza, on the southeastern side of Ibarra, offers the closest hiking trails to the summit of Taita Imbabura (the Imbabura mountain, known to local folklore as a “taita”, a father figure). To reach the community project in San Clemente, we continue past these steep roads, which take us far and away from Ibarra’s already provincial world, transforming cement into plantations and the grass into paramo.

The bus stops – for the few buses that actually make it up here – are decorated and have names, as if trying to convince us that we aren’t quite yet in the middle of nowhere. Let’s just say, it is more a quiet road than a deserted one. As we pass by a forested ravine, a group of musicians with the what’s what of Andean musical instruments — the zampoña, the rondador and the charango — are waiting around for us. A short distance away, a man dressed in white, Manuel Guatemal, one of the community’s leaders, waves for us to approach.

“We are in Karanki territory,” he explains. This ethnicity dwells throughout the area, in the eastern and southeastern mountains of Ibarra, in northern Imbabura province. He walks us up towards a quaint wooden construction. This is his humble abode.

“Family is like a plant, it must stay together to grow,” he explains. He then tells me that all immediate family members spend a lot of time together, and that because I have arrived, I will also become one of them. 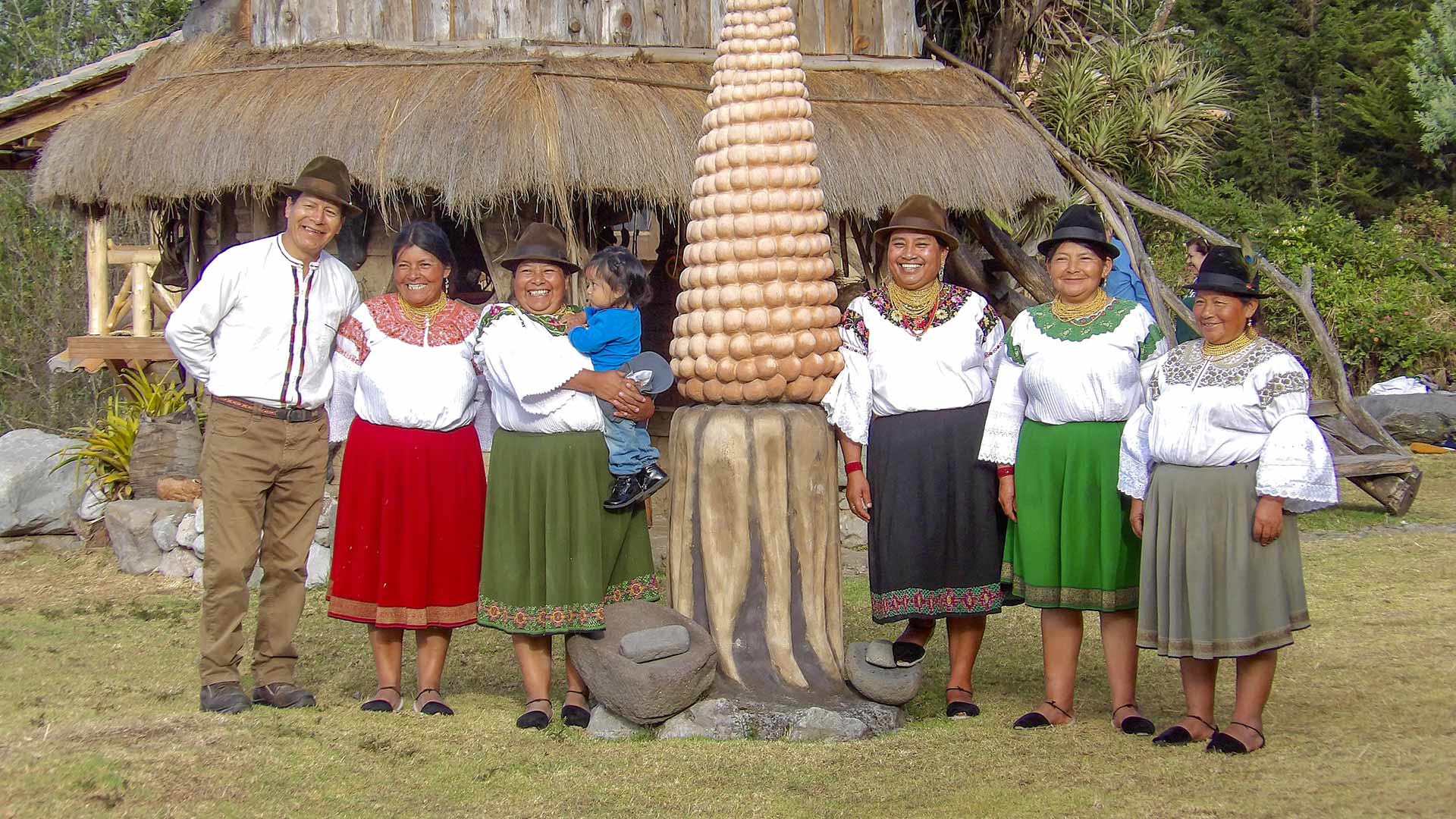 And then, he opens the door. Tapestries, handmade decorations, embroidery: an explosion of color takes over. It is a small family museum of community relics. Small in size, but not in breadth. A woman, appears from inside the kitchen and greets me with the same kindness as Manuel. Today, Laura, Manuel’s wife, is preparing a delicious jicama ceviche accompanied with barley, chicken, avocado and oca soup. Oca and jicama are endemic tubers. Jicama is already sweet, but oca becomes sweet as it dehydrates. This produce is grown and harvested by the cook herself. I analyze Laura’s dress and, as if reading my mind, Manuel explains the features: the embroidery of her skirt represents the plowed land, the hualcas (or necklaces) are yellow and represent corn, a crop revered because of the beguiling 120 local uses for the grain.

The midday sun searches for a cloud to hide behind but finds none. We take refuge under another structure, larger than the first. At the entrance, a small display of espadrilles, a central accessory of Karanki clothing: fiber sandals made of recycled rubber and resistant to long walks in the mountains. We find other objects representative of their culture. A copper sculpture of Atahualpa contrasts with the colorful, background mural. Both are Manuel’s pieces. “What you see in the background,” he tells me, “are the three worlds.” Like many Andean communities, Karankis divide the universe into the Hanan Pacha (superior world), the Kay Pacha (earthly world) and the Uku Pacha (underworld).

Everything seems to have meaning. The textiles, for example, are composed of quingo patterns that represent different things according to their distribution. The most common form is a zigzag that portrays life and the situations that compose it as a nonlinear creation. Manuel tells me that this very pattern has taught his children a lesson: “it doesn’t matter if things go well or not, what’s important is to learn from experience.” There are instruments, a coin collection, newspaper clippings with information on the community project, and pottery. Here, the community also organizes talks, art demonstrations and performances for visitors. 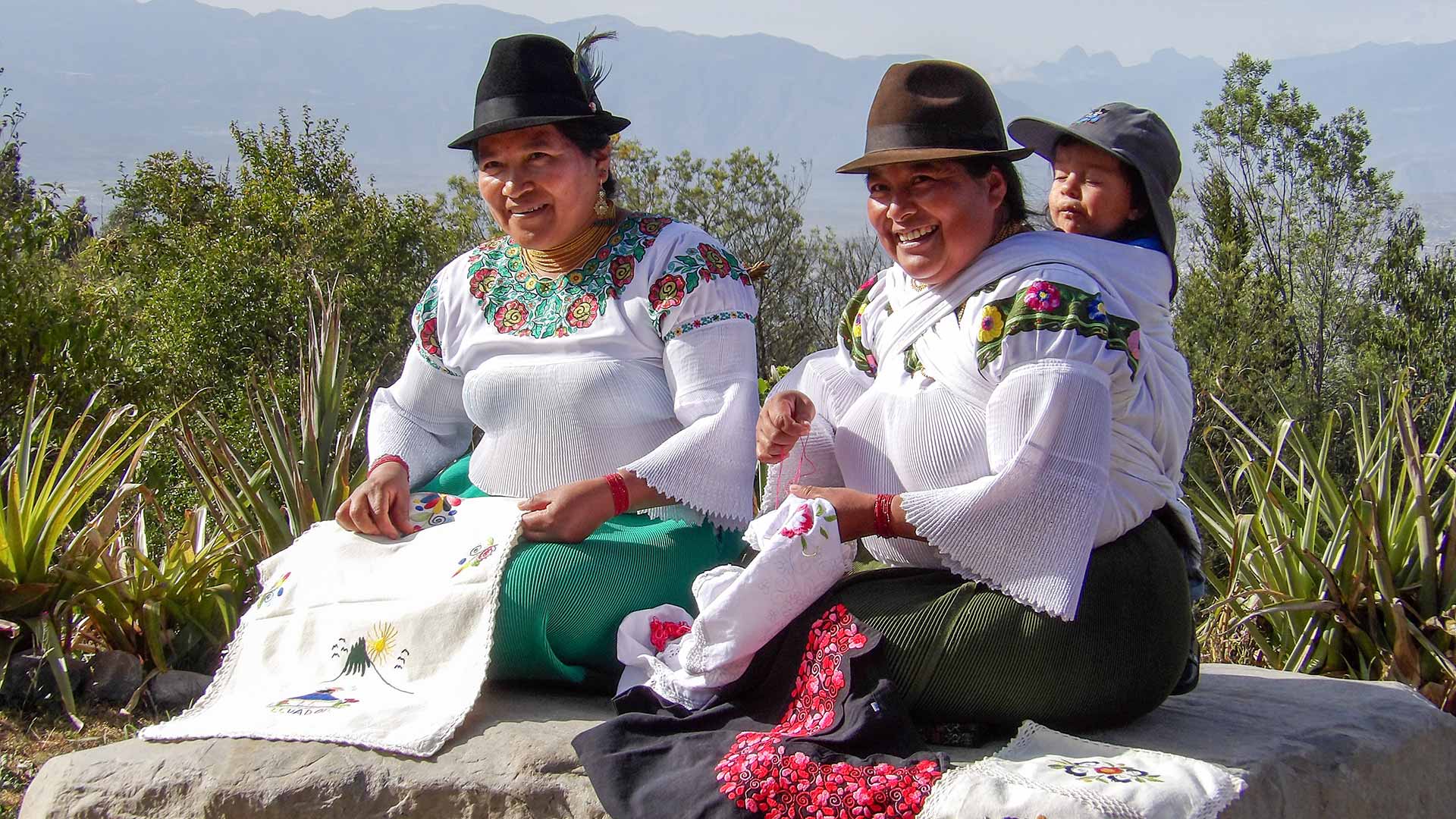 Outside, we find Rosa and a friend, both embroiderers. They tell me they have worked this craft since they were little girls. They used to sell their art in Otavalo or Zuleta, but today, thanks to the community project founded in 2000, neither they nor their work needs to leave their community. The embroidery is central to the project and the 16 member families share their knowledge, homes and food with visitors, like the group of university students that has just arrived. They have made it all the way from the United States to the wilderness above La Esperanza, where they will spend three days with the family, listening in on Manuel’s quiet, philosophical explanations.

We walk to a spiral-shaped monument made of stones. “This is the cycle of life and death and our journey through the 13 months of the Andean lunar calendar.” The Karankis don’t use the Gregorian calendar. Manuel leans down and picks up an Aya Uma mask to explain more about the distribution of these months, which divide themselves into sowing and harvesting seasons. His children and grandchildren are present, and seemingly drink in the explanations, even though they surely have heard them before. They seem enthralled as he expands his talk into stories of dreams, myths, and agricultural cycles, and empowers them by describing the Karanki as the “toughest” of farmers. 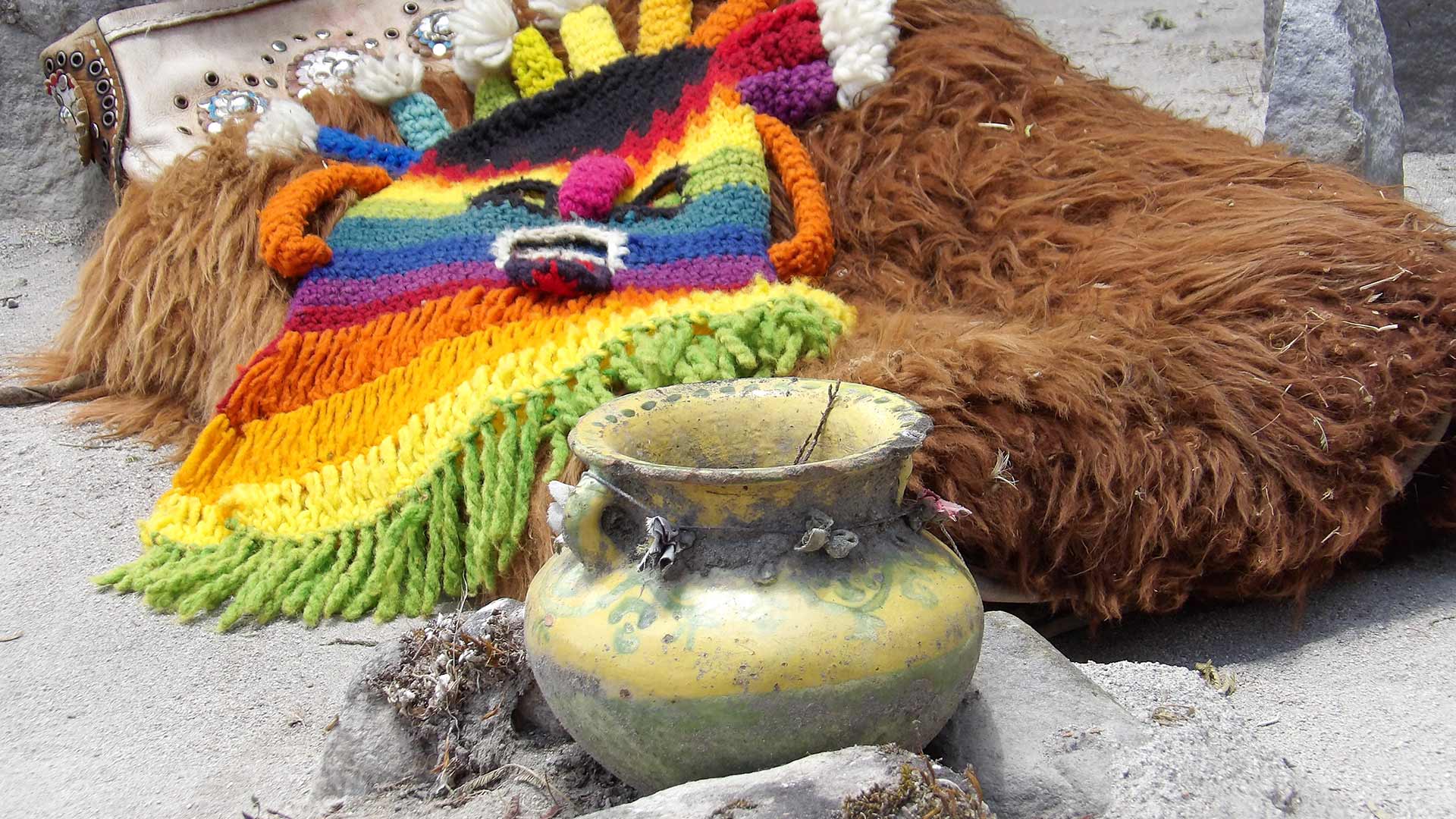 There is also a place for cleansing rituals christened Uku Pacha. Fittingly, the space lies underground. Dark, with nothing but a bench and some unusual implements that belong to the community shaman and to the mysteries that surround this ancient ritual. “We use all the elements. Each fulfills a function,” he explains. Fire, for example, is used to consume the bad and transform it into something new.

From the room they call Samay Chasqui (the messenger’s resting place), we see the sun set against Cerro Golondrinas and Chiles volcano. Past these elevations lies Colombia, reminding us of how close we really are to our neighboring country. I immediately recall the story Manuel told me about the Karanki being like a plant: a lonely but colorful yuyo (field mustard) flower blowing in the wind, dotting the golden grasslands of the paramo.