A rafting Family day out in the Amazon

This wasn’t what we expected. In fact, this was all going horribly wrong. Our nine-year-old daughter Emma was balling her eyes out, chest heaving, nose snotty, hot cheeks streaming with tears.

We were standing on the sandy banks of the River Anzú, the morning grey and overcast, probably foreboding if you’re a nine-year-old. A stone’s throw away, the café-con-leche river flowed swiftly by, about five bus-widths wide. In the run-up to the trip, Emma had been fine about the prospect of floating down the Anzú in an inflatable raft. Well, to be honest, maybe she didn’t quite understand the reality of what “Hey kids, we’re going for a day’s rafting in the Amazon!” implied. It must not have chimed with the reality of the bright blue inflatable boat that the Torrent Duck team had hoisted down from their sturdy Land Cruiser two minutes ago. Although Emma didn’t say it, I’m sure she was thinking “You brought me all the way down here to get in that glorified lilo? We’re all going to die, you fools!”

As my wife Amira took her turn at trying to comfort Emma, and while the team pumped the raft with air and checked all was shipshape, our guide began his briefing. We all diligently donned our helmets and lifejackets, pulling and adjusting the straps, until we were all fashionably satisfied. Gino was a genial teacher and leader. A fully-qualified guide with a decade’s experience, this was in fact his weekend job —or, as he put it, his weekend escape. His ‘real’ job was at CNT (the state-run telephone company) as a technician, ensuring that a dozen infocentros around the region were always online and serving their communities. “I’m happiest when I’m on the river, in nature,” he had told us on the drive to the put-in. “There’s nothing better to clear your head and make you appreciate nature than paddling.” You tell that to Emma. 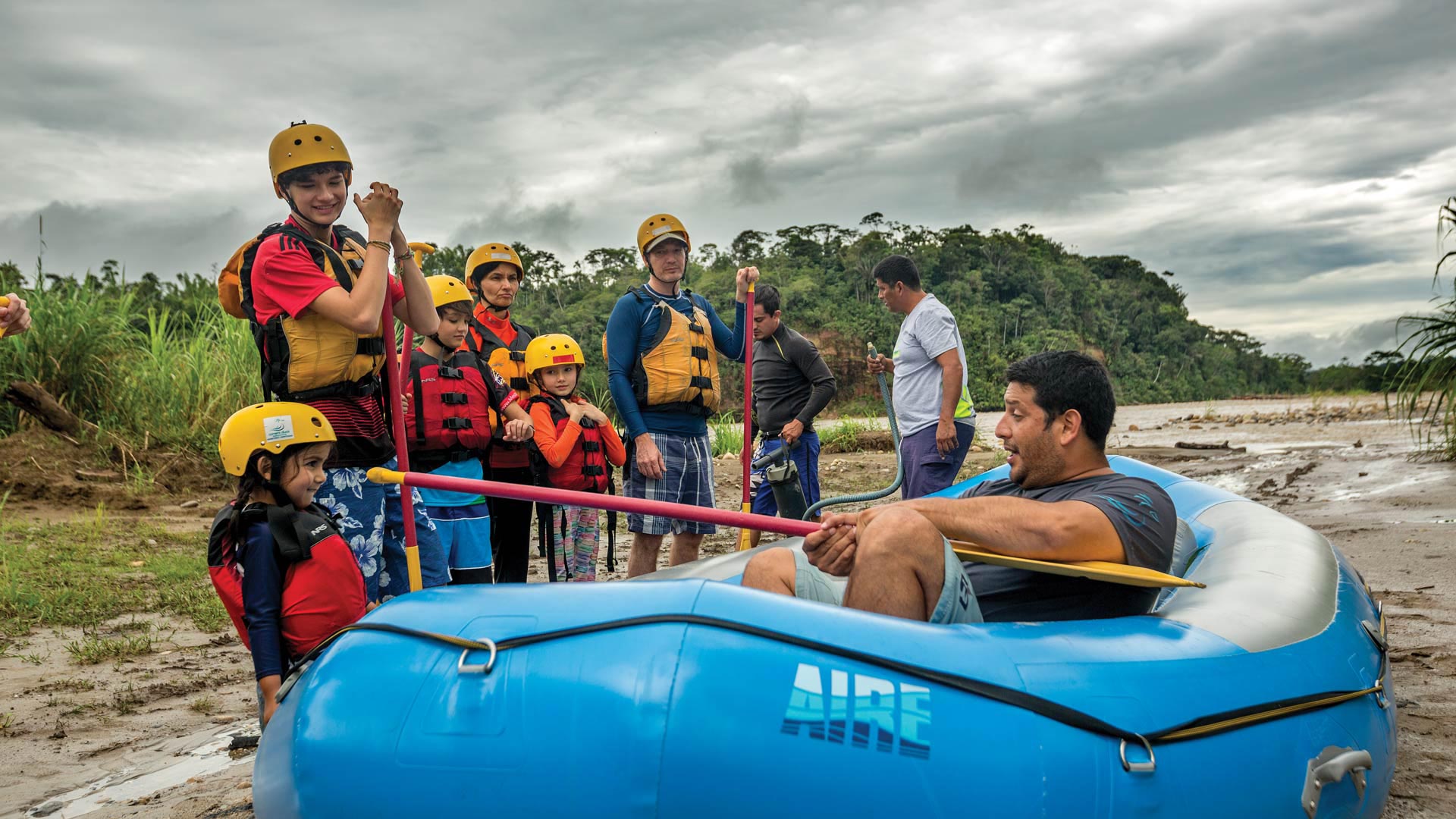 Ironically, although nine sounds pretty young to be out on a white-water river, our family group was joined by a mother and her young daughter, who was little over three. Three? On a raft? In the Amazon? Well, yes. Torrent Duck believes you can raft at any age (although it’s probably best if you know how  to swim): it’s a question of an experienced team and choosing the right section of river at the right time of year. In that sense, Ecuador is blessed with an embarrassment of choices. With fast-flowing rivers tumbling down both sides of the Andes, here you can raft any month, any season —although deforestation, mega hydro-electric dams and mining projects are a real and present threat to watersheds up and down the country.

Gino gives us the low-down on what to do if we fall in the water (float with our feet facing downstream, the paddle between our feet), what not to do with your paddle (bash your fellow passengers on the head with it; lose  it), and how to paddle as a team. This is perhaps white-water rafting’s most interesting aspect. You must raft ‘together’. There’s no me. It’s work-as-a-team-or-you’re-off-the-boat, mate. You must learn the strokes, follow the captain’s orders, and paddle in sync to make things happen.

Three-year-old Emma is now pursuing a tough line of questioning a reticent nine-year-old Emma: “Why were you crying, hmm? I saw you crying before, but why?” The girls are given the middle seats in the rear section of the raft, in among the cooler with our lunch on-board and a dry bag for special items. Daughter Emma is given a cord to grasp —amazing how holding on to something can make you feel safer— and my wife, Amira, who doesn’t know how to swim but is game for anything, is next to her. I’m at the front with my fourteen-year-old son, Julian, to provide some oomph.

And we’re off. Usually we’d be accompanied by at least one kayaker, who acts as a guide and safety raft were we to capsize or someone fall in. But today, since it’s Sunday, we are joined by three, who maneuver about us deftly like sheep dogs herding their flock. 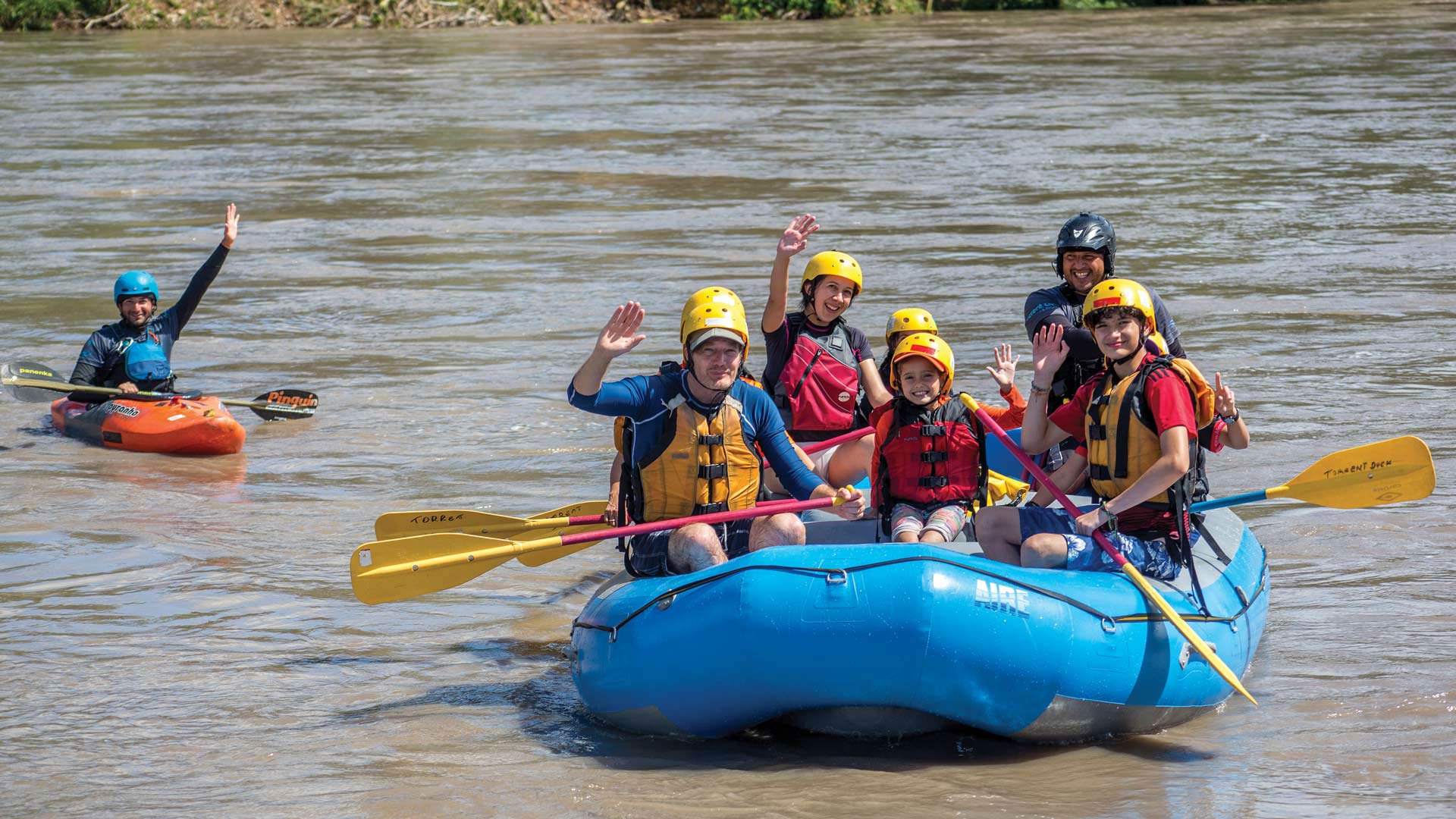 Later, at lunch, Roberto Rueda, one of the partners at Torrent Duck, shared his company’s vision with me: “Rafting’s a wonderful day-out for families. It’s got a great mix of fun, adrenaline, nature and relaxation. People of all ages can enjoy it. We’ve been growing as a company with foreign guests over the last years, but it’s a shame that  more Ecuadorians don’t get out to enjoy their natural environment more! Our family trips are designed to do just that.”

For the next hour, until we reach Puerto Napo, we see virtually no sign of civilization. Just green nature, the rustle of the wind in the trees, the gurgle and froth of the river as we glide onwards.

Gino reads the river’s twists and turns brilliantly, shouting out his orders in a voice that is at-once friendly yet forceful. He really does seem in his element, enjoying a leisurely Sunday paddle and exuding a deep confidence that puts everyone at ease when we start to approach some white-water.

From what I know, it’s crucial to get the line of approach to a rapid right. It’s all about maneuvering the raft to the right spot in the river before the rapid begins, so that when the current does quicken its pace beneath the raft and the waves begin to swell and curl, you’re where you want to be.

Gino coordinates our padding so that we hit the rapids just where he wants: in our case, he avoids the highest waves deliberately, keeping us away from both the river’s banks and from the rapids that he deems too powerful for our raft, whose average age can’t be over 15. Of course, once he feels the group has grown in confidence and got over their initial fear, he steers us into whiter water, where the rush of the waves gets our adrenaline pumping.

After a few sections of rapids, a long straight means those who’d like to swim for a while, can. My 11-year-old son Tom doesn’t need a second invitation. He jumps in feet-first, emerging smiling while declaring that the water is “pretty chilly”. I soon follow him, as does Julian. And before we know it, half of my family is excitedly bobbing along at what seems quite a clip. This beats going to watch the umpteenth Avengers instalment hands down, no questions, any day.

As the morning progresses on the Anzú, the grey clouds suddenly disperse, replaced by blue skies and sun. I was enjoying our jaunt all morning, but when the sun comes out, it becomes that much more magical. At times, I’m entranced by the incandescent light reflected on the waves, or able to spend whole minutes gazing out at the forest, at the puffy clouds overhead, even while paddling.

Although Emma turns down the repeated chances to swim in the calm stretches, she does take up Gino’s offer to ‘ride bronco’ on the bow of the raft (after her brother Tom has shown her how it’s done in style down a couple of rapids). As she sits on the inflatable rim, feet dangling over the edge, gingerly squealing as we head towards a batch of big waves, you’d never know she’d been ready to sue us for gross parental irresponsibility just two hours before. 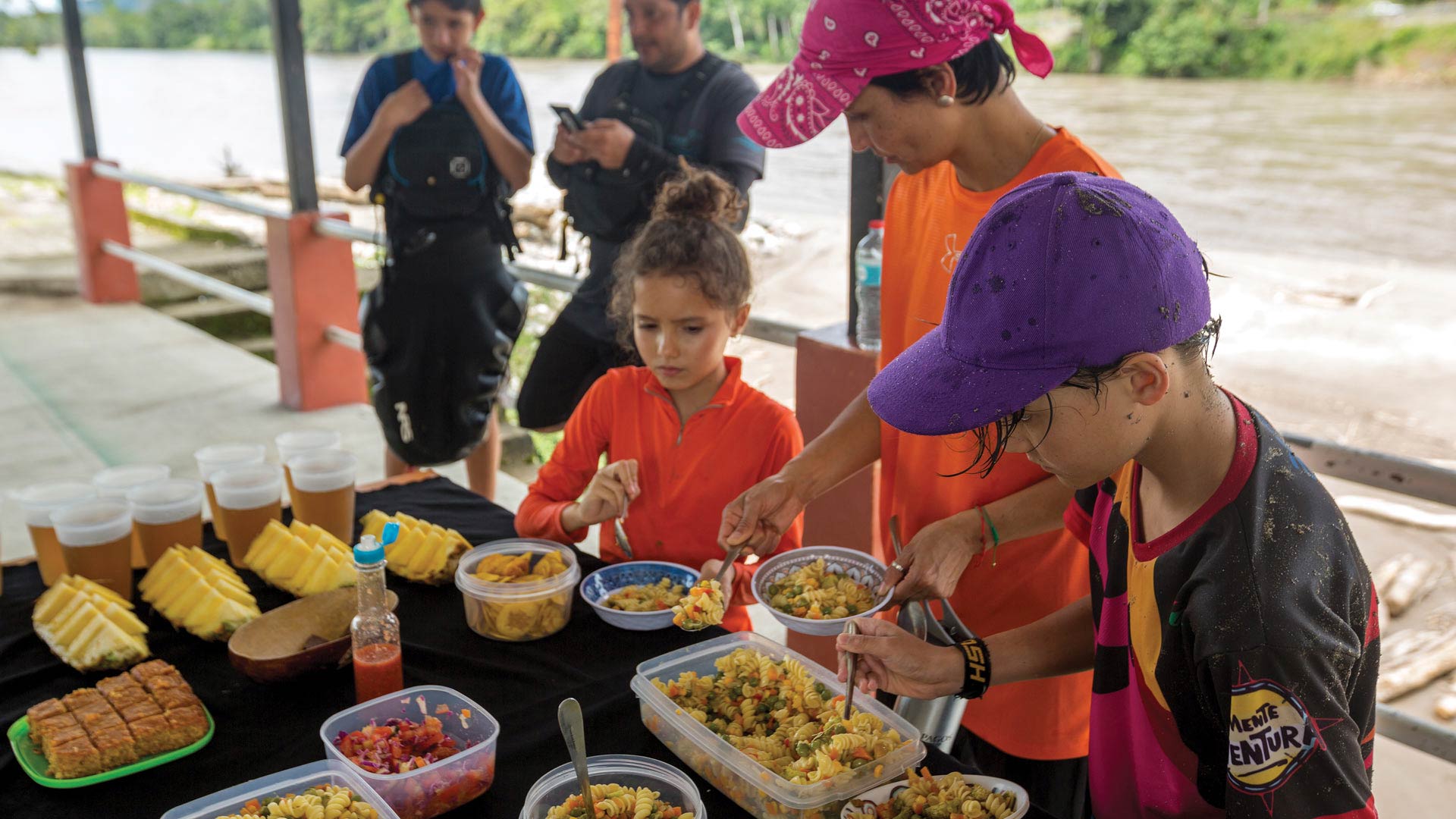 We break for lunch in Puerto Napo, in a municipal house on the banks of the river, close to the older bridge from which a group of firemen and volunteers are abseiling (for fun). As the children play in the sand and wade along the shore, the crew set up the table and food, inviting us over to enjoy a carb-rich, delicious lunch, seemingly conjured out of nowhere.

Usually, the day would end here, but Roberto has a surprise for us. We board the raft once again and make our way downriver beneath blazing sunshine on what is now the River Napo. A few more rapids and leisurely stretches later, we pull in on the right-hand bank. We disembark and make our way up some steps and past a cabin. We soon come to a delightful swimming pool cupped by an idyllic forest and a thatched cabaña: the Hotel Selina (formerly Cotococha Lodge).

The bright sun is beginning to descend behind the flanks of trees to the west. Emma —now the consummate rafting pro— and her brothers, order cokes and a bowl of plantain chifles. The afternoon light plays hide-and-seek amid the branches, casting shadows that dance between golden patches with the breeze, a hidden speaker plays electronica from a bush, a cold beer appears as if by magic… Now we’re talking: a family day out to remember in the Amazon.

The guys at Torrent Duck are happy to organize all sorts of tours on white water in Ecuador from their base in Tena. Their family trips cost $55 per adult and $35 per child, with lunch included, guides, etc. They also do night-time, full-moon paddles and can organize corporate outings for businesses of 1 day or more — fantastic for team building.