A life at the side of la Mama Negra

The Mama Negra, a unique festivity only celebrated in the city of Latacunga, honors a Volcano-soothing Virgin and escorts an enigmatic protagonist, a man dressed in drag, with a turban, an ornate blouse, long gold earrings, vibrant red lips and a black face.

It’s fiesta time in Latacunga. We make our way through town, past vendors selling treats unique to this city chugchucaras, tortillas de maíz towards the sounds of a crowd cheering in the distance. As we get closer, we see the icon of Our Lady of Mercy, la Virgen de las Mercedes, with a white tunic that shines against the sun. “Long live la Virgen de las Mercedes! Long live Latacunga!”. 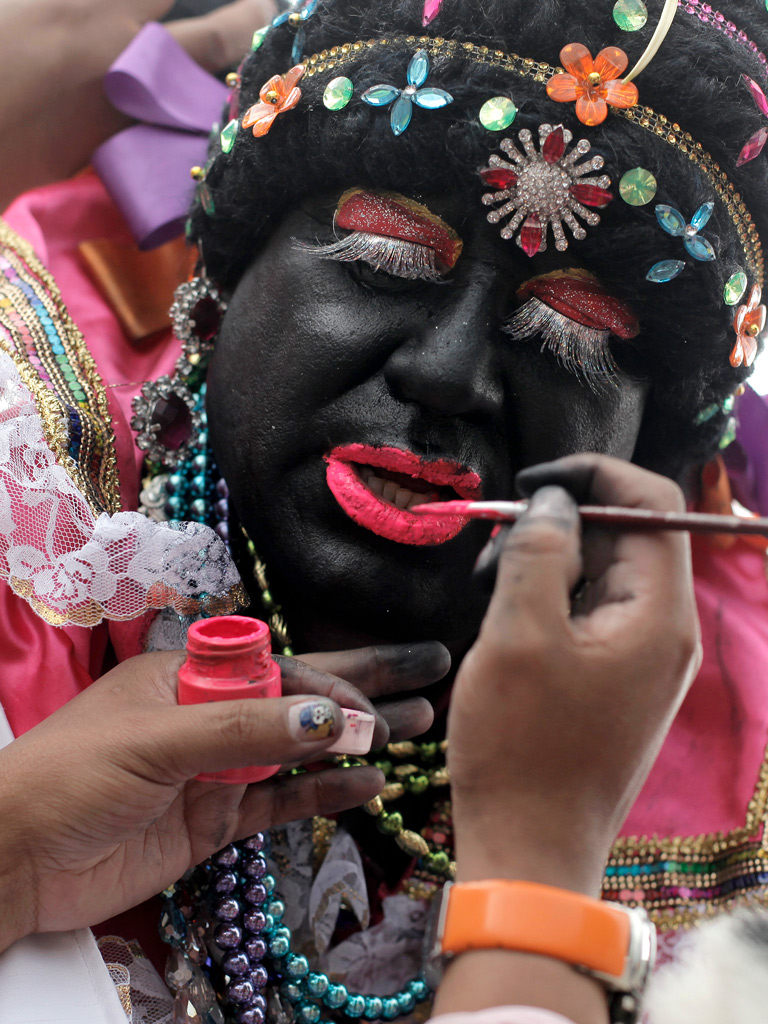 The mass in honor of Latacunga’s most beloved religious figure, which rests at the city’s main church, takes place under the watchful eye of emblematic Cotopaxi Volcano, to the northeast. The fact that this snow-capped peak lies so close to the city is one of its claims to fame, together with the festivities for the Mama Negra, an event that has generated its share of a buzz over the past few decades.

We make our way through town, past vendors selling treats unique to this city chugchucaras, tortillas de maíz towards the sounds of a crowd cheering in the distance.

We manage to reach the procession, as four men carry the platform on which the Virgin rests. That’s when I meet Jorge Aymacaña for the first time. He stands to the front, on the right. His face reflects years of wisdom and, despite the heat, he doesn’t seem tired. In the middle of cheers, songs and the market ladies throwing rose petals that fall over us like rain, we are able to talk a while. Besides being born in Latacunga and being a faithful devotee of the Virgin, Jorge has been Captain and prioste (main party organizer) of the Mama Negra festivities for fifteen years.

The strong scent of fritada and hominy of traditional chugchucaras seduces everyone who passes through Latacunga. At parties they are the go-to dish, you can also have a bite of the emblematic allulla (salt biscuit) accompanied with queso de hoja (fresh cheese), or its traditional corn and cheese tortillas. If you have a sweet tooth, don’t miss the crispy aplanchados or the soft buñuelos that melt in your mouth. 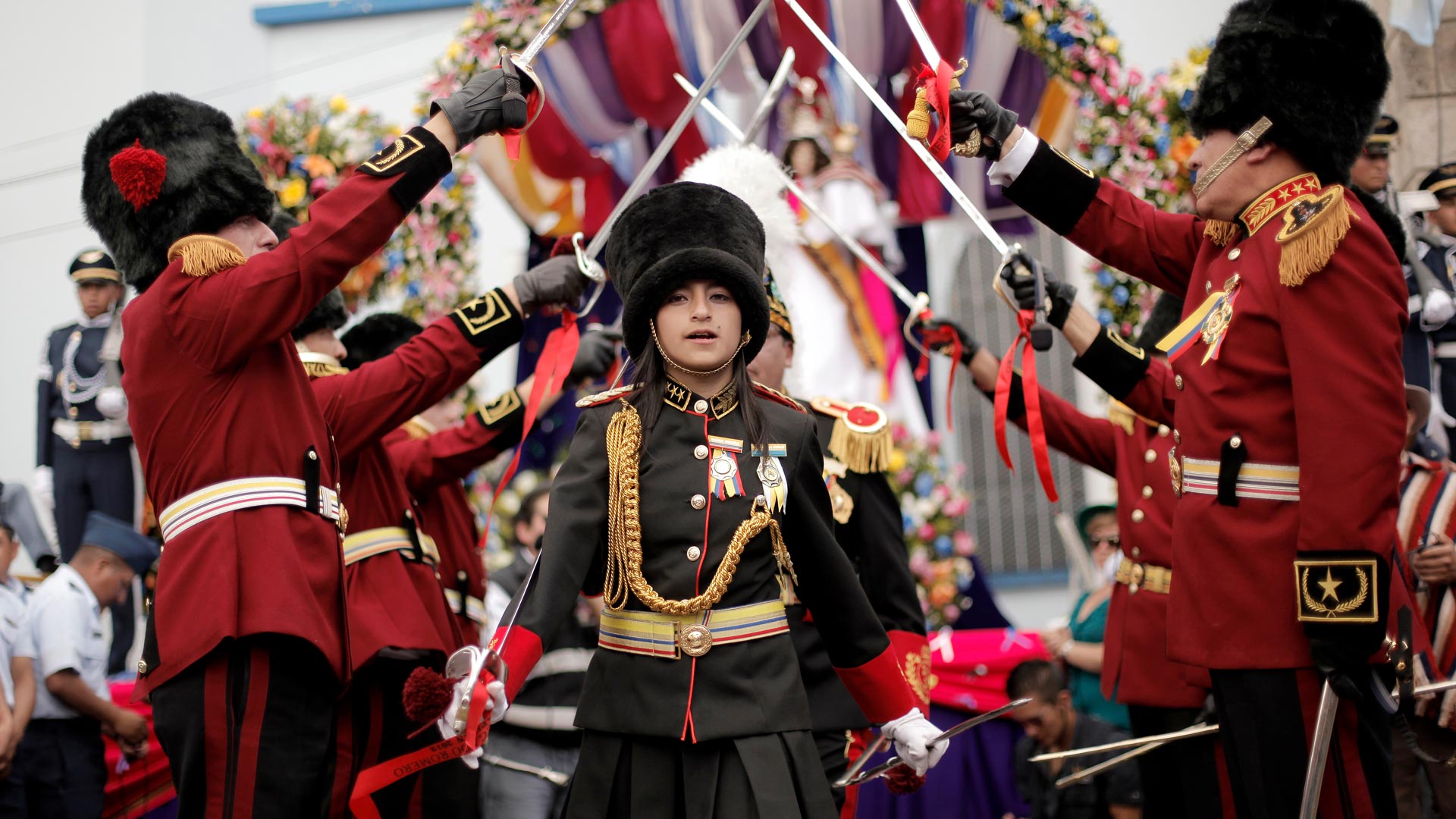 Amidst this joyful, festive backdrop, every September 23 and 24, the devoted participants of this celebration, known as Latacunga’s official fiesta, take to the streets to parade their icon and complement their reverence with a band of bizarre characters. Among locals dancing along to the music, with their colorful costumes that evoke the very whims of the local naïve painters, the protagonists begin to appear. They seem to be lifted straight from the pages of a children’s book. There’s a man waving an LGBT-style flag and a Moorish King, a boy dressed like an angel on a horse, and the guacos, engaging in express spiritual cleansing as they walk by the onlookers. And then, you see her, the highlight, the hit, a woman (who is actually a man dressed in drag with his face painted black) clothed like a princess, the Black Mama herself, greeting and waving to those who have come to see her. She carries a doll (her daughter, Baltasara) in one arm and sprays scented milk through a soplete (a small handmade bottle) with the other. Her horse is led by champuseros and she is escorted by the Captain, who proudly wears his uniform and sabre. He is followed by engastadores. From the thick of the crowd, they seem like a blur of costumed people, but every costume tells a story.

Among locals dancing along to the music, with their colorful costumes that evoke the very whims of the local naïve painters, the protagonists begin to appear

“The Captain is in charge of everything”, says Jorge. “Even Mama Negra respects him, because she is his lover, and she can only dance with him”. He imposes his authority and is tasked with organizing the celebration. He appeals for jochas, acts of asking his neighbors to contribute to the party. He organizes everything along with the market women from El Salto, all with one common purpose: to pay tribute to Our Lady of Mercy. “We celebrate in honor of our spiritual mother, for all the favors she grants us. She takes care of us, protects us from Cotopaxi’s eruptions, and she deserves our devotion”, says Susana García, one of the market vendors and a passionate devotee.

The curious figure of the Mama Negra has her share of possible origins. Some believe the celebration for the Virgin has existed since Colonial times, but that the Mama Negra character herself is a mid-twentieth century addition, when Latacunga-born Jorge Montalvo became the first person to actually paint his face black and officially proclaim himself as her. Although neither the Mama Negra nor the other characters’ origins are known, many scholars on the subject have their theories. Some say the Mama Negra is a mixture of Spanish and indigenous traditions. They attribute this to the expelling of the Moors from Spain, an event fresh in the minds of the early Spanish conquistadors, who brought their traditions to the indigenous people and, at the same time, allowed them to maintain their ancestral beliefs. That’s where European characters like Saint Gabriel, the Moorish king, the flag-bearer, and others are mashed up with indigenous guacos and champuseros. Others say the Mama Negra was the Virgin Mary’s maid, and that when she was liberated, her character transformed from being an oppressed African American woman to the liberator of black slaves from the nearby El Salto mines. And, of course, since this is a religious celebration, the Latacungueños will quickly refer to Our Lady of Mercy as their savior from Cotopaxi, especially from a most violent eruption that occurred in 1742 and did not, miraculously, obliterate the city. 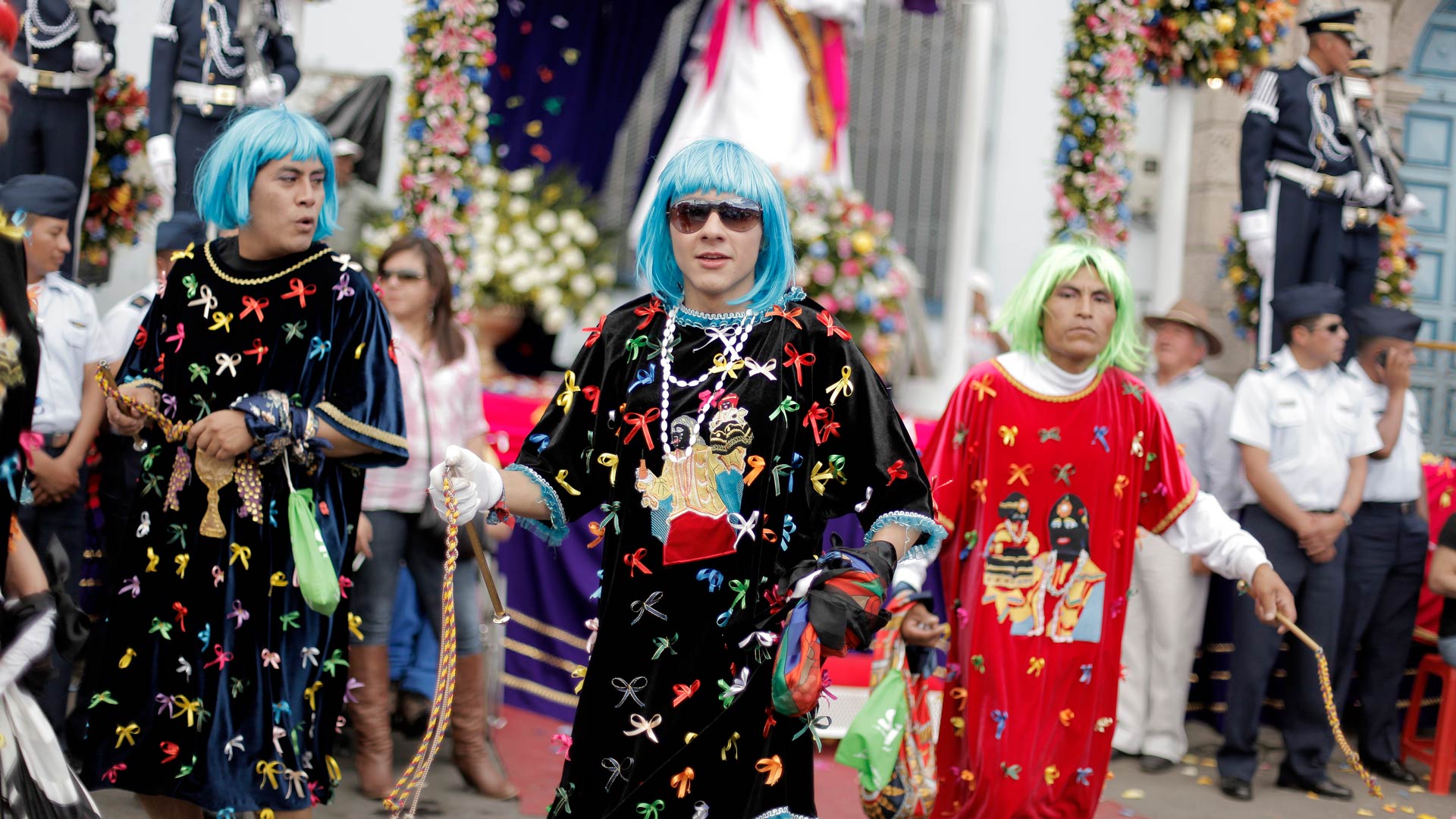 The sellers at La Merced and El Salto markets are in charge of organizing Mama Negra’s celebration in September. They donate and prepare the food that will feed everyone during the two days of festivities. They start days in advance peeling potatoes, skinning guinea pigs, plucking chickens, and preparing liters of chicha (a traditional alcoholic corn beverage), safe in the knowledge and faith that the Virgin of La Merced (who is honored over this fiesta) will return all that they give, twice-fold.

Origins are never easy to pin down. This is a story with missing chapters. One that is still being written today. Every devotee has his or her version, as each carries the weight of their ancestors’ traditions as they parade through the town. All Latacugueños have their own reasons to celebrate. Thus, somewhat surprisingly, Latacunga has proclaimed it the city’s official celebration, replicating the fiesta in order to also honor Latacunga’s independence, on November 5th.

After being the main prioste for so many years, Jorge holds his head up high and smiles: for him, this is a dream come true. He gave up his position this year. “I made a covenant with our Holy Mother so that I could be in charge for twelve years”, he says. He confesses that serious health issues threatened to end his mission. “I prayed and asked Her to let me stay longer and here I am, three years later”. As Jorge would say, his work at the Mama Negra festivities is over, yet his legacy of devotion and faith lives on. “It has been a source of deep pride and honor. To be the Captain is to be man of character, a man who sets an example, and I’ve done just that; I don’t come home drunk like the others. And that is, for me, the eternal gratitude I bestow”. Hanging from his captain’s uniform, his polished sabre reflects a silent moon that proudly rests atop glorious Cotopaxi.