In March 2017, two urban artists from Quito decided to hide out for five days inside the Arte Actual gallery to paint day and night. They hid what they were up to from the public with a cloth. Those who wanted to find out more could only peek through a hole in the sheeting. The exhibit ran for five days. Only on the last day did they remove the veil to reveal all. It was something like voyeurism, a peep show of sorts: a work of art making art. Like its artistic process and its subsequent final act, the artists responsible for “Encierro” (Lock Up) don’t go by your usual names. At least, they’ve become known by their pseudonyms: La Suerte (Spanish for Luck) and Apitatán. 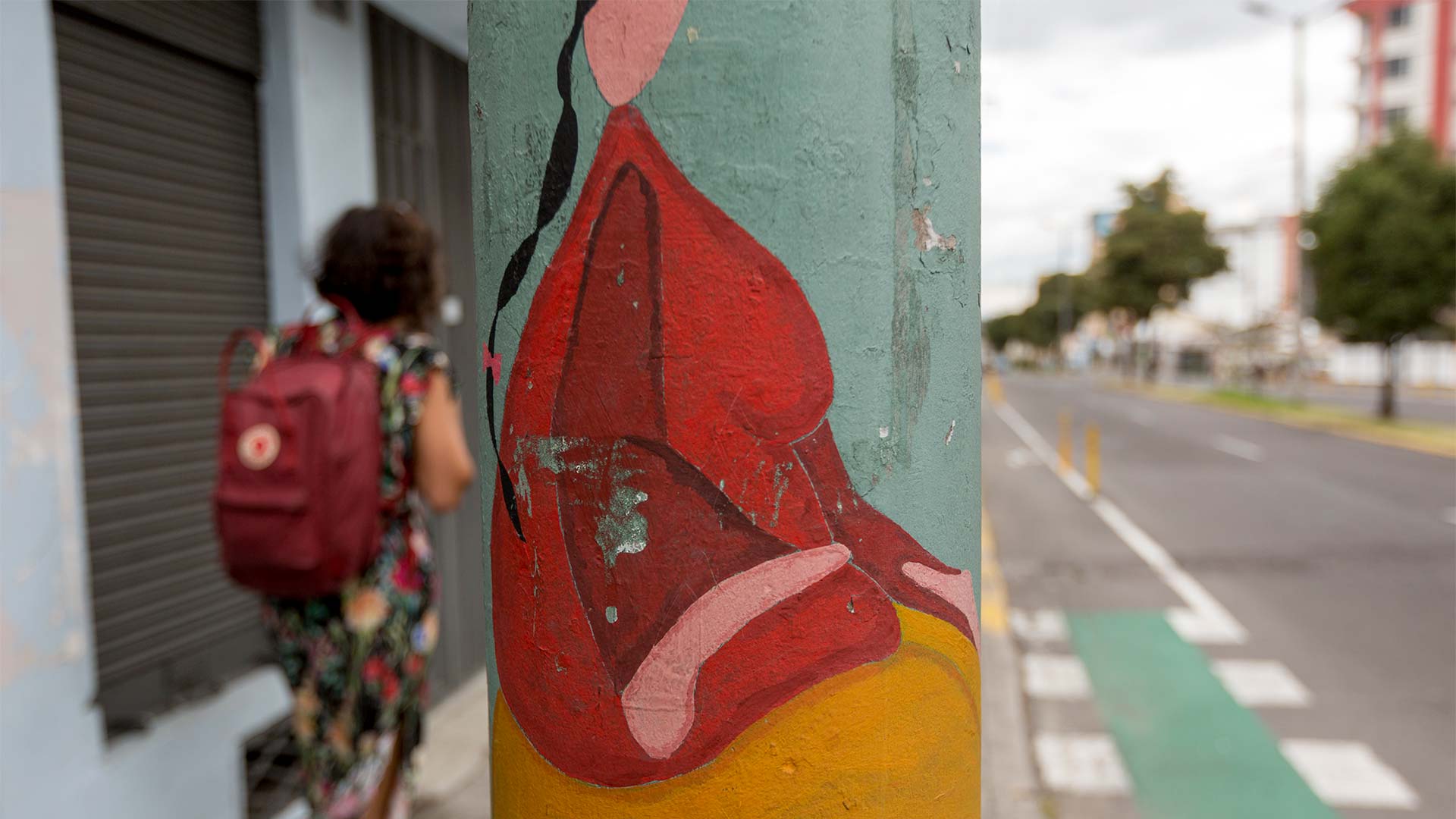 In fact, the exhibit/performance piece of these young artists speaks volumes about the art movement today in the capital: it’s ephemeral, witty, experimental… elements that are at least as important as the final oeuvre itself.

La Suerte and Apitatán, in spite of being an intrinsic part of the burgeoning art scene, are mainly known for their murals, murals many identify even without seeing the signatures on them. If you see an Apitatán, the familiar eye quickly recognizes his spraycan style, his character tropes, the pronounced jaws, the scenes from everyday life. If you spot a mural with figures of long, svelte women, curving lines and beady eyes, it’s more likely than not to be a work by La Suerte.

La Suerte, or Sofi (the name she almost never goes by) is one of Quito’s many emerging artists. In her words, “she does a little of everything” to survive as an artist. Curator Ana María Garzón describes her as “a person who knows how to play within the system. She may have a romantic image of being “anti-system”, but in fact, she’s someone who surfs the waves of the emerging art scene like a pro.”

So, where is Quito’s emerging art scene, you ask? If you are not in the circle, in the know, where to start? That’s why we went to find La Suerte: she could help guide us to it.

Our Quito stroll with La Suerte

“It’s important to think that art is also an educational tool,” he says. His space provides advice to artists developing art projects. In addition, Ladera organizes talks about art and brings important figures to talk about their processes in organizing or curating art exhibits. Maio emphasizes something that I have heard before:

“It’s important that people can access the processes that artists undergo, and not only their work.” 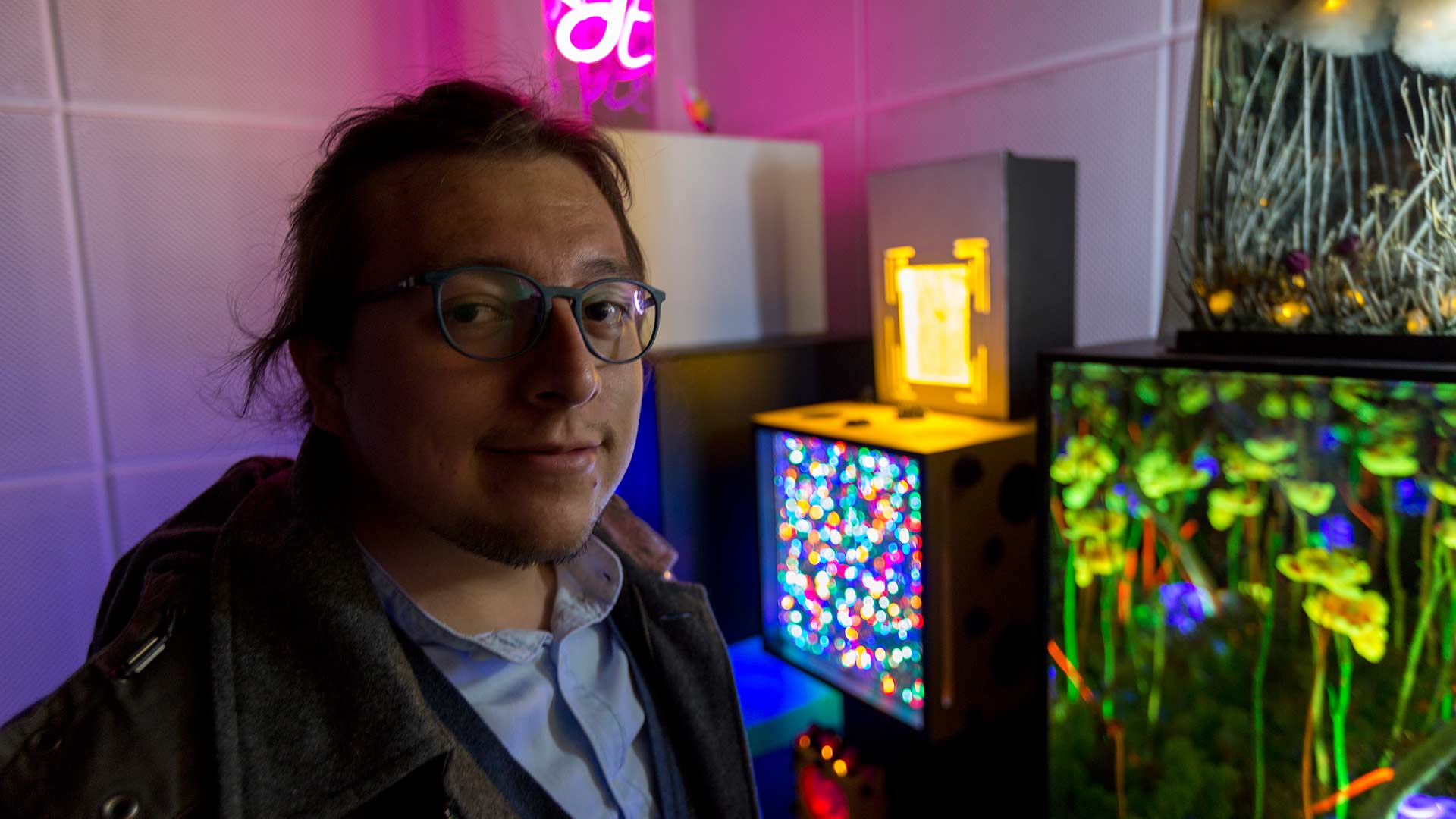 To schedule an appointment and visit the library, visit the Facebook page (LADERA/) or webpage www.ladera.space.

We continue south on La Coruña towards the heart of La Floresta, a neighborhood whose walls have become very colorful, indeed. When passing by the many murals and graffiti, La Suerte is full of opinions… she knows most of the artists. When she sees something she dislikes, she doesn’t hold back: “it’s that some just don’t have a propuesta (a concept, a meaning)”. When arriving at the roundabout we pass by a specific wall which until only a few days ago displayed scenes by artists

The mural she likes best is at the end of Calle Madrid, at our second stop, inside a house with colorful graffiti. Five different ventures operate within the house, a vegan café at the entrance, the workplace of artists María José Rodríguez and Cristian Tapia, Café Roscón, a cafeteria and cultural space led by artist Pablo Ayala. It has become a meeting point for creative minds to discuss their projects. Natalia Espinosa’s workshop Perro de Loza is also here.

We met her and her students making shapes out of clay in silence.

“I love ceramics because it connects you with everyday things. In that sense, you have a closer communication with people. It requires a different timeframe. It’s relaxed. You need to be fully present,” says Natalia.

The next stop on our walk takes us to the northern reaches of the Historic Center, to Nodo House (on Juan Larrea and Buenos Aires), the artistic residence of No Lugar (No Place), a project that has been active for eight years, offering exhibit and residence space for artists. The house is perfectly camouflaged among other residences of the América neighborhood, but when entering through the doors, art is everywhere. Every room in the three-storey house is a workshop of an artist who was granted residence at No Lugar.

“We’re interested in being a platform for emerging artists where there is also a contextual aspect… offering our resident artists a new vantage point of the city,” says Byron Toledo, one of the founders of No Lugar. In the house, bits and pieces of paintings, photographs, installations, paper, canvas, fabric and paint are everywhere. We are towards the end of a residence term, and only Clio Bravo and Brenda Vega are still around… The others are currently exhibiting at MAS Arte Galería, where No Lugar has set up for them to display this year’s productions. 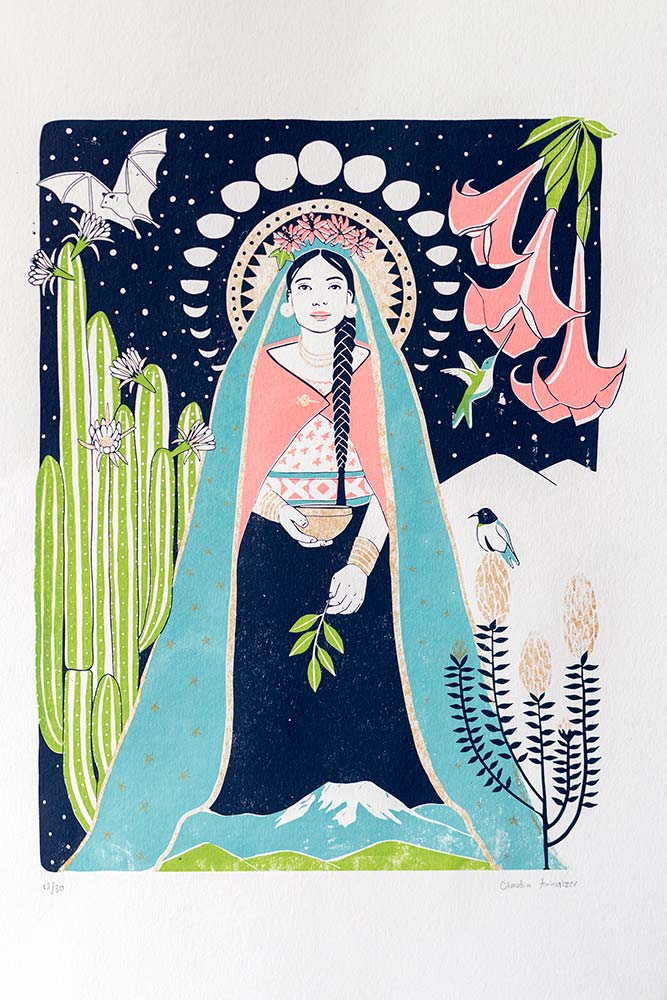 La Suerte moves with confidence and ease in this world, greeting artists, interested in what they are doing.

She leads us to the last stop on our route: San Marcos, to another group of young illustrators and friends, Comuna Serigráfica, 10 a silk-screen workshop. Artists such as Jaime Villaroel, Isadora Soroche, Francisco Galárraga and Claudia Anhalzer meet here at the Priest’s house next to the church of San Marcos to create. “Beyond being a space we share, it’s a space where the knowledge of the neighborhood and its trades are shared with us,” says Jaime.

Perhaps that’s what this is all about: while seeking to create independently, our young artists seek connections, too, whether among their peers or among the wider community and the city’s traditions.

La Suerte says goodbye, tells us that she wants to go beyond the walls… which is a poetic destination for anyone’s work, indeed. There is much to explore… Quito is nurturing a new generation and we will be here to see it grow and propser.

Don’t miss out on the agenda of this cultural center, a space where artistic and visual art initiatives are generated daily. It was awarded the Iberescena Prize and will certainly be a window to what’s going on in terms of independent art in Quito in the future.

A small Ecua-Mexican gallery that exhibits design, furniture and art. Aura uses recycled and original materials for their designs where you can find Acapulco type furniture, tables and desks … and where you can also check out exhibitions from young Ecuadorian artists.